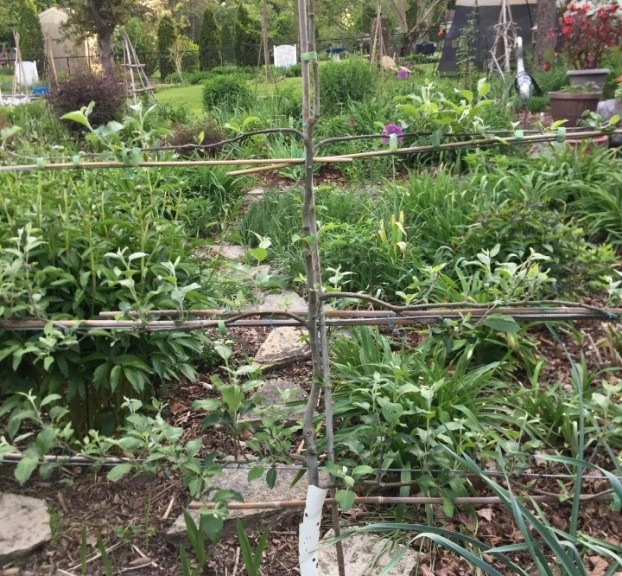 I have a lot of gardening books and whilst I do search on the internet if I have a quick question, there are a few books that I go to repeatedly and often. One of these is from the UK Royal Horticultural Society – Pruning & Training. I am sure you could find a similar book in Canada but as this book was given to me a few years ago by my father-in-law as a present, it has special meaning for me.

I love growing fruit, apples, grapes, currants, blueberries, to name a few and as I have a smaller city garden, this comes with challenges. I have to make use of all available space and prune effectively to fit everything I want into my garden. Hence the reason why this book is so important to me and why I use it so often.

There are chapters on ornamental trees as well as ornamental shrubs and roses and a good introduction describing the parts of a plant as well as the principles of pruning and training. But it is the chapters on tree fruits, soft fruits and climbing plants that I refer to most often. I actually have PostIt® notes on the sections that describe the pruning shapes I have chosen for my apples, currants, gooseberries and grape so I can check I am doing it correctly. I must admit it took a few years to observe the effectiveness of pruning well, I was always hesitant to cut off too much of the plant, much as I still save every perennial seedling that comes up in my garden. In my last house we had a grape for approximately 6 years and whilst we did get some fruit on it, we could have doubled or tripled the harvest with better pruning, but I hated to cut so much off.

For my grape vine I originally had it growing over an arch, but it soon outgrew that support, so we had to build a new support system and then re-prune it into its new system. There are many different systems that can be used for grapes including the rod and spur system in which the grape is grown along 3-4 horizontal wires to the guyot system in which shoots from two horizontal stems are grown vertically.

The chapter on tree fruits starts by showing diagrams of all the different forms or shapes as well as describing basic and pruning techniques. There are lots of photos and diagrams in this book so that you can visually see everything being discussed, which I really like. There is also a section on renovating neglected tree fruits.

I chose to prune my apples trees as espaliers on a four tiered tree, this is my trees fourth year and first year that they have blossoms, so I am hoping to have my first apples. It is fairly time consuming, especially as I didn’t know what I was doing the first couple of years, but I followed the instructions religiously and am now beginning to approach the trees with pruners in hand confidently.

My currant and gooseberry bushes were pruned as multiple cordons with three vertical arms. I have this grown both on the same support system that I have for the fruit trees but also on bamboo poles. I find that by growing them in this way as opposed to a bush, I can fit more currant bushes into the same space, I grow red, pink, white and black, and they are easier for me to pick. I still have a high yield of berries and am able to harvest almost all of them.

There are plenty of videos on the internet showing different pruning techniques, maybe even too many as it is often difficult to choose just one, and then you end up getting side tracked. As I was writing this article and looking up videos, I ended up watching three including one on heucheras. Here’s one you might like from the RHS on renovating fruit trees. 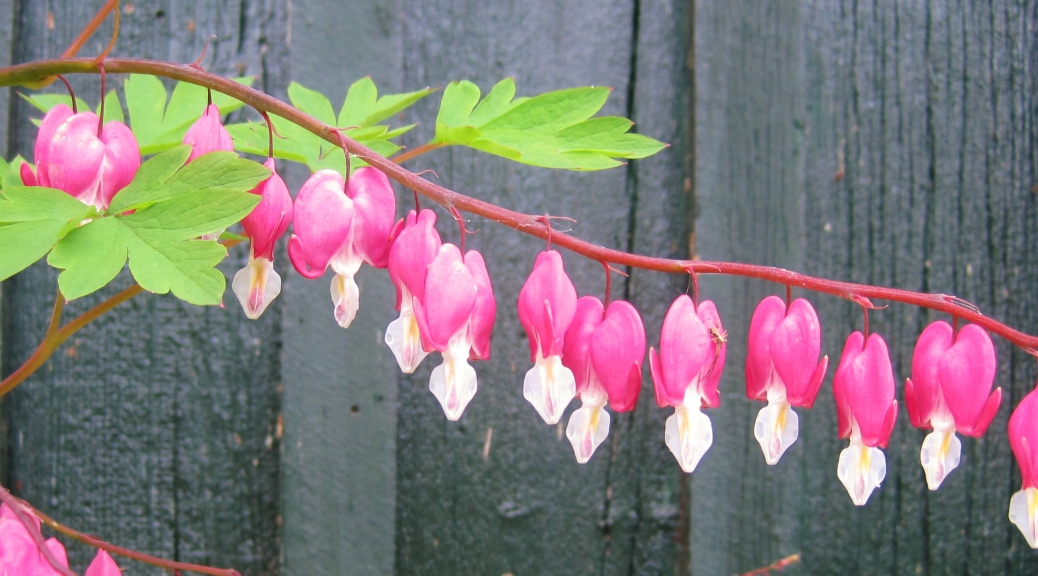 Just when Ontario gardeners thought spring was peeking through the piles of snow – with warmer weather and the change to daylight savings time – we’ve been derailed, and not by Mother Nature.

It’s been a tough few weeks with the increasing spread of the coronavirus disease (COVID-19) to North America. People are becoming increasingly alarmed, and in the past few days we have seen measures by our local health authorities and governments to ‘flatten the curve’ of the pandemic by imposing restrictions on travel, movement, and large events. For best information on the COVID-19 situation contact your local health unit or the Government of Ontario website. Peterborough Public Health, led by Medical Officer of Health Rosana Salvaterra, also has great resources.

For Ontario gardeners, the past week has seen the cancellation of two major garden shows, numerous Seedy Sundays (and Saturdays), various Ontario Horticultural Association District meetings, and local meetings (in venues that have closed their doors to external groups). 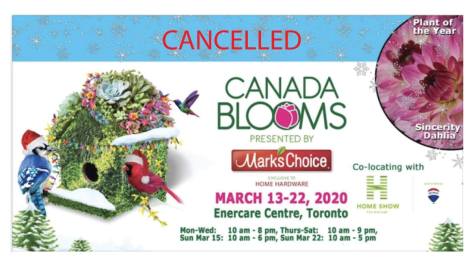 The biggest shock was the last minute cancellation of Canada Blooms just before its opening (March 13-22) as so much hard work and preparation goes into this event (6 days of building, but also plant-forcing, planning, designing etc.). But all is not lost! Thanks to Paul Gellatly (new Director of Horticulture at the Toronto Botanical Gardens), Sean James (Master Gardener and gardening consultant), and Helen Battersby (Toronto-based writer and garden speaker), we have photos and video of Canada Blooms before it was dismantled so that everyone can appreciate the results, even if we don’t have “smell-o-rama” and can’t see it in person.

Photos of Canada Blooms (thanks Paul Gellatly) Here and here

The Peterborough Garden Show is also a huge draw for Ontario Gardeners. This year was to be the 20th Anniversary show – completely community run by volunteers from the Peterborough Horticultural Society, with all profits being reinvested in the community in Peterborough.

In addition, our beloved Peterborough Seedy Sunday this March 15th has been cancelled (along with many others across the province). Organizer Jillian Bishop (of Nourish and Urban Tomato) is encouraging people to visit the website and click on links for the various vendors to support them by buying seeds online.

What are Gardeners to Do?

Don’t give up hope.

These are challenging times, but our gardens and love of gardening will help get us through. If you have other ideas please tweet them out to us or share them on our Facebook page.