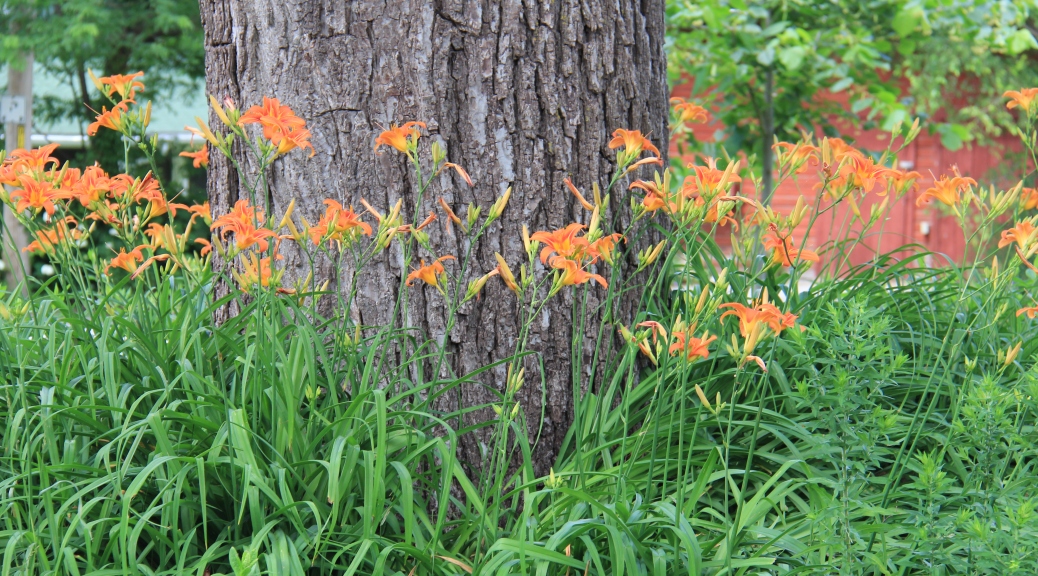 Once upon a time there was a gardener who wanted something that grew quickly to screen a neighbour’s unsightly yard and house addition. She noticed that the ‘ditch lilies’ that surrounded her front yard tree (already there when she moved in) seemed to be pretty vigorous, so she planted a row of them between the yards, along with some small bridal wreath spirea (Spirae aprunifolia).

What she didn’t realize was that she had unleashed a horrible monster into her garden, one that quickly engulfed any other plants, sucked all the moisture out of the soil, and eventually killed most of those spirea.

Yes that gardener was me, many years ago, before I knew better and before I became a master gardener. So this year I knew I had to finally tackle the monster, remove all these plants, and reclaim this garden area. I knew how much work it would be (it took me three weekends this spring), but I got it done. Here’s my story…

Even though you see it growing in ditches around the province, Hemerocallis fulva (aka ditch lily, tawny daylily, orange daylily, tiger lily) is native to China, Japan and Korea and was introduced to North America in the early 19th century. They spread via seed and a network of tuberous roots, and can reproduce and proliferate from a small fragment left behind during removal. In 2020 the Ontario Invasive Plant Council added this plant to their invasives list, and their Grow Me Instead Guides offer some native alternatives to consider.

So this was my garden bed in May this year – just waiting to burst out and take over, again. Every single one of these plants had to be dug and lifted, making critically sure to get every last bulb. These photos show how many bulblets can be on just one stem – it was quite overwhelming to think of the job ahead.

All the plants that were dug out were put in black plastic garbage bags and left out in the hot sun beside our barn for a month. At last count I used 45 garbage bags, and they were a slog to carry as they were heavy!! Eventually they went to our rural dump, where the hot composting they do should ensure their demise.

Bit by bit, over three weekends, I got them all out. It was beneficial to have a dry spring, as it made digging them out a little easier. But still a workout!

Once everything was cleared out, I weeded the soil for anything else. All that remained were my tulips and a few hardy perennials that had been gasping for air for more than a decade.

With a fresh load of soil on top and a final check for bulblets done (and knowing that I would have missed a few), I put in some new plants, aiming for 50 percent native plants (those marked with a *). The area has both sun and shade spots so I needed to be careful with my choices.

The garden bed needs time to fill in, so we’ll see what it looks like next year. In August I went back into the bed and sure enough, there were new ditch lilies growing in a few places. Remember it only takes one bulblet for them to grow. But half an hour later they were all gone as well.

I suspect I will on alert for the odd ditch lily plant showing up for the next few years, but I’m really proud to have removed this nasty invasive plant from my garden and rejuvenated it with native plants. And my two lovely sugar maple trees are glad for some more breathing room.

NOTE: The orange, single flower Hemerocallis fulva is the only daylily currently listed as invasive. It is a diploid daylily. Most cultivated daylilies are triploid and do not spread invasively like the ditch lily.