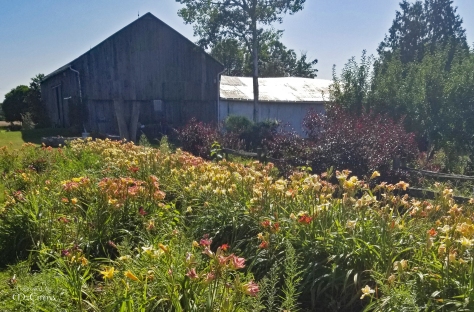 One of my first gardening loves was daylilies. This probably started with Master Gardener Beryl Harris taking me to an open house for “We’re in the Hayfield Now” daylily gardens in Orono, Ontario. And every time I see Henry Lorrain today at my favorite breakfast haunt, I think of how much fun those open houses were. They were like the social event of my gardening season and I know many others who felt the same way.

Henry and his then partner, Doug Lycett (who has since died), knew all of the renowned hybridizers of the time – mostly people from the eastern U.S. right down to Florida. Henry and Doug were probably the premier hybridizers in Canada, if not the only ones when I first discovered daylilies. Those were heady times. Hybridizers were aiming for ruffles and frills, picotees and edges, rebloomers and the colour blue, among other things. There are 390 cultivars registered to Lycett, Lorrain/Lycett and Lorrain.

Collectively these peoples’ daylilies created the genetics for generations of daylilies and encapsulated the best of the best. still have early plants from Henry and other key hybridizers.

Kudos Henry. We owe you!

2 thoughts on “I Remember When…”